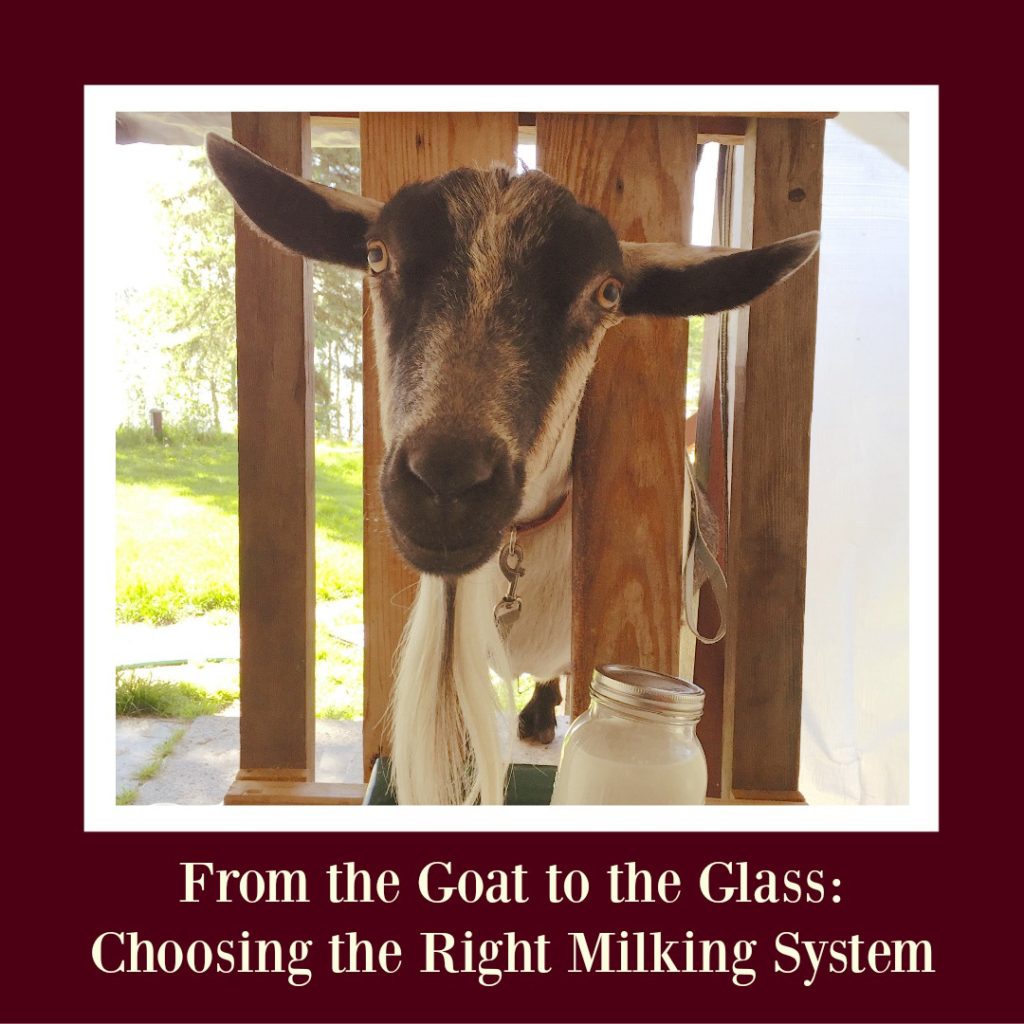 Choosing the correct milking system can be a little bit of a hot-button topic in some farming groups. You have your hand-milking purists, your budget-minded suction-only fans, and you have your pulsating milker devotees. Full disclosure here: I fall firmly into the latter category. Since I’m the only person I know who has done all three and can speak to my own experience on the matter, here are my thoughts to help you decide which milking system is best for you.

I already have a post on how to do hand milking, so if you haven’t learned how yet, pop on over there and give it a read. Personally, I think hand milking is the best way to go, if you have strong, healthy hands and wrists. An efficient hand milker can milk out a full-size dairy goat in about five minutes, and is left with only the milk filter* and jars to wash at the end. However, if you are like me, and your wrists can’t handle milking more than one goat, you’re probably not going to want to use this method long term. If you have repetitive stress injuries or some other physical impediment, it’s okay to use a mechanical milker. One favor I’d like to ask of the hand-milking fan club, though, please go easy on the machine users. We’d like to do it the old-fashioned way, but sometimes we can’t.

Cons: Can be difficult to do if you have hand or wrist issues

Please note that using a teat dip after milking – whether by hand or by pulsating machine – can help prevent mastitis in your doe. Her teat orifices remain open for quite a few minutes after milking, and bacteria can enter the teat canal during that time. Iodine teat dips help kill the bacteria before it can do any harm.

There are quite a few suction-only, non-pulsating milking machines on the market, as well as many YouTube videos on how to make one yourself from things you might already have at home or can easily obtain. The main appeal of suction-only milking machines is the low price. I’ve seen people say they’ve built their own for between $60 and $80, or bought one already assembled for around $120. Everyone likes a bargain, and most people like a good DIY, too, so these suction-only systems hit a lot of the right buttons. When we bought our suction-only system, it was way back when my wrists were starting to be numb for significant amounts of time in the morning and something had to be done, but we weren’t sure if we even wanted a milking machine at all. We opted for the suction-only system, but it didn’t take long to decide that was not the right decision.

Suction-only systems always have the same components – a mason jar with an adapted lid that allows tubing to be attached; a suction device such as a brake bleeder, handheld Foodsaver bag sealer, or a small manual pump; and plastic teat cups that are sometimes made from large empty syringes. 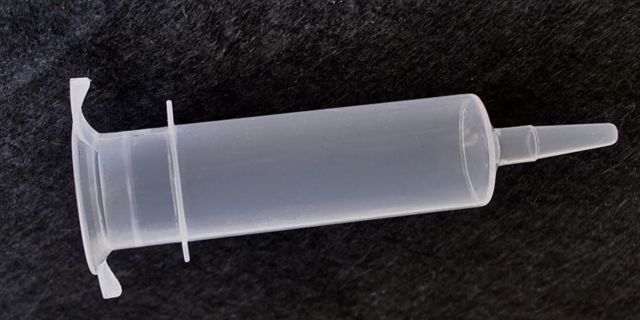 It is critically important that users of suction-only systems keep an eye on the pressure gauge and that the pressure gets no higher than 12psi. You will have to manually fluctuate the pressure between 8psi – 12psi.

Research has been done that says suction-only, non-pulsating systems can cause damage to the teats by chapping at the least, or tissue inversion at the worst. Our does hated the system we had, and we only used it a few times. Yes, it’s easy to use and yes, it’s easy to clean, but the girls’ teats were purple after using it even though I kept an eagle eye on the gauge and used care to fluctuate the pressure. Doing my own internet searches on potential side effects turned up increased likelihood of mastitis in studies done on cattle, and I’ll post some links below for you to do some of your own reading if you’re inclined to do so. Meanwhile, let me share (with permission) this exchange that happened when I asked Dr. Ken Brown, DVM, his thoughts on the matter:

Me: “Question is regarding milking systems. I’ve always heard (and read on NADIS) that non-pulsating milkers can damage teats (cow and goat). Another person says there has never been any proof that non-pulsating milkers cause any damage and that it’s all blown out of proportion. For the record, I’ve used both types and would not consider going back to a suction-only system. What is the official word from the vets, please?

With the interval of the pulses being so critical, if it gets tossed off then milk production starts to drop. Calibration done monthly to keep systems up to par.

Use some common sense – even in nature the suckling kid is on-off for suction to get milk, with a gentle minimum to keep teat in mouth, etc. A good milking system mimics Nature.”

I know there are many people who have used non-pulsating suction-only systems with success, and I am genuinely pleased you haven’t had any issues. I cannot recommend these types of milking machines, which is why I haven’t included any links, even to the one that we bought back in 2012.

This quote is from Extension.org, mentioning the relationship between pulsating and teat health or damage:

This quote is from Cornell’s website with emphasis added by me:

“Milking conditions that lead to the development of teat end lesions include:

Pros: Inexpensive; can be DIY; does not require much hand strength

Cons: Damage to the teats is a real possibility; discomfort to the doe due to hard “teat cups”; potential increased risk of mastitis

Pulsating electric milking systems can be expensive, so I’d suggest saving up for one if you can manage it. They’re worth every penny. The pulsating action mimics the sucking of a baby on the teat and protects the doe against damage from constant suction. Even someone with limited hand strength can use one with ease. Although they may seem complicated at first glance, they aren’t really that complicated after all. The main components are the vacuum pump, vacuum chamber, milk bucket or jars, pulsator, and teat cup assembly.

I’ve had two pulsating milking systems. I love them both. My original pulsating machine was a Surge belly milker. I have no complaints whatsoever about my Surge, but if I had to pick something to complain about, it would be that the stainless-steel bucket was heavy, but that wasn’t a big deal.

The Surge system was originally designed to be hung by a belt under a cow’s belly (which is why it’s often called a belly milker) and the slight swinging action of the bucket under the cow would aid in let-down as it mimicked the action of a calf under her. The vintage look of the bucket and lid appeals to my sense of style, I admit. Because the Surge system was designed for cow use (four teats) and goats of course only have two teats, the Surge is easily set up to milk two goats at one time. These systems can be built yourself from parts bought on eBay or you can order a system already put together for you. We bought our Surge system from Perry’s Milkers. We’ve also done the eBay parts method to help other people put together systems for themselves.

When we first started out with dairy goats, our milk stand was in the open air on the covered back porch of the house. Milking wasn’t (isn’t) a very photo-worthy activity for us so we have only a few photos of it happening, but my sister took these in 2013 on her visit to Alaska. We mounted the on/off switch and a moisture trap on the pillar next to the milk stand, and the vacuum pump was, at that time, protected from the elements by an upturned plastic tote near the wall of the house. We’ve since moved the vacuum pump inside an Igloo cooler with holes drilled in it for the tubing to pass through. The cooler insulates the pump from the cold while also keeping it safe from rain and snow. 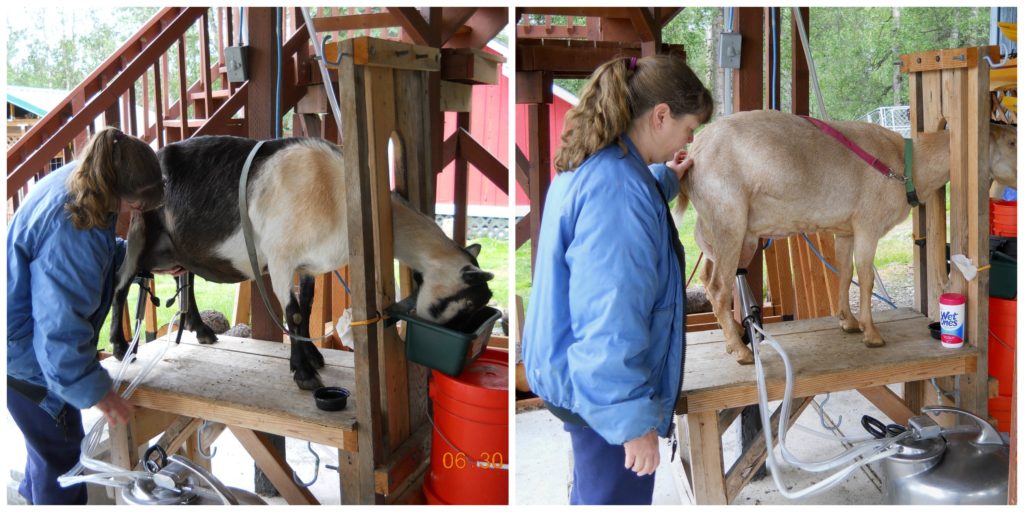 And here’s another photo of the machine in use. You can see the moisture trap and pressure gauge on the left. The on/off switch is now mounted on the wall to the right, out of frame. The pump in its cooler is in front of the milk stand, to the left of the table, but not where you can see it in the photo. 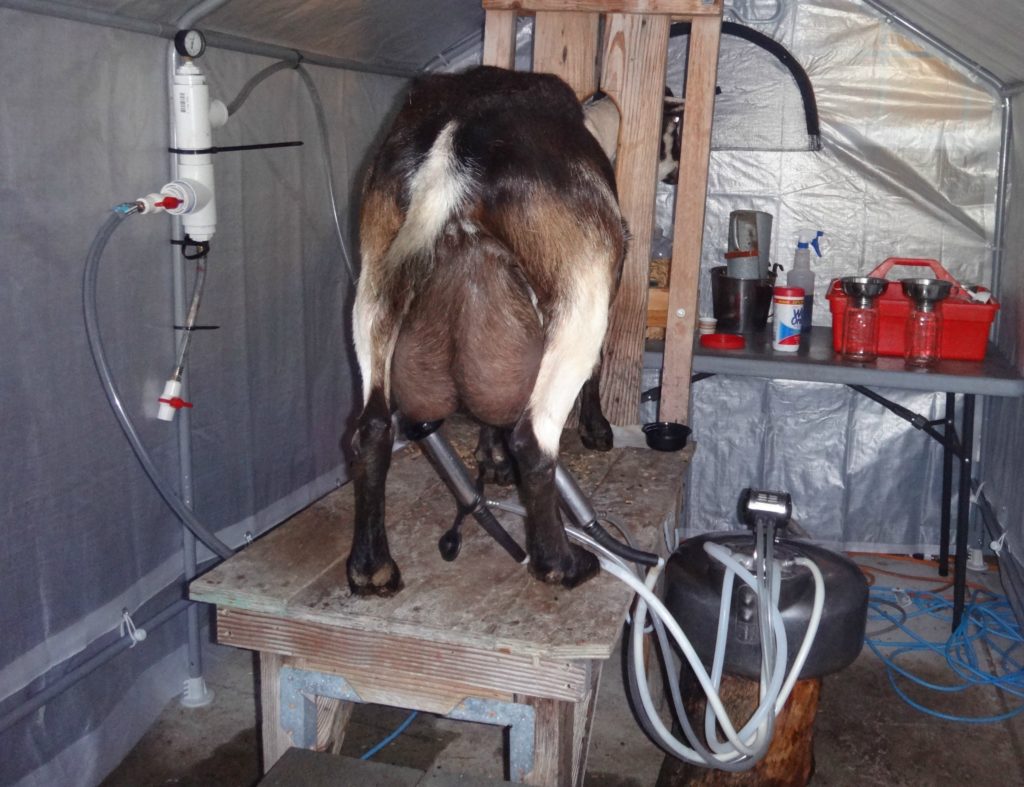 Three years ago, Jim put up that 8×10′ greenhouse on the porch for me to use as a milking parlor. It’s so much nicer than milking in the open air! Last summer, we began work on a new barn that will include a proper milking room. We also sold our beloved Surge system and replaced it with a Simple Pulse system. We kept the vacuum pump that came with our Surge for use on the Simple Pulse. The pump was the most difficult thing to have shipped up to Alaska so I’m happy that Jim bought a low-maintenance oil-free pump right off the bat. Whatever type of pump you choose, look for one that is at least 6 CFM.

Knowing that my greenhouse parlor was going to give way to an actual parlor in a few months, I haven’t picked out a configuration for setting up my system parts yet, and this video was taken on Christmas morning when the stainless steel bucket and the in-line filter were both brand new, so forgive the slightly haphazard placement of the milker on the table – click here to view the video.

I am SO impressed with this system. Like I said before, I loved my Surge, but the Simple Pulse is so elegant and streamlined compared to the Surge. We bought some upgrades to ours – the bucket and filter – but even without them, I am very impressed. I’m not affiliated in any way with Simple Pulse nor am I affiliated in any way with Perry Milkers for the Surge system, so I would suggest you spend some time on their websites learning about them for yourself, and you can also find other brands of electric pulsating milkers on the market as well.

Cleanup is easy by running soapy rinse water through the system when you’re done milking, then bleach or vinegar water. Smaller buckets or jars can be run through the dishwasher and larger ones can be hand washed, and the tubing can be periodically cleaned with a tubing brush and soapy water.

Pros: easy to use; can be used by people with weak or compromised hands or wrists; easy to clean

Extension.org – The Role of Milking Equipment in Mastitis

I am not a veterinarian. I do not play a veterinarian on television. No medical advice is implied or expressed. Do your own research.

As an Amazon Associate, I earn from qualifying purchases. There are Amazon affiliate links in this post from which I may earn a small commission but that will not affect your purchase price in any way. I am not affiliated whatsoever with Perry’s Milkers or Simple Pulse; I just really like their systems.