I suppose most families have a favorite recipe that makes the holidays. It just wouldn’t be Thanksgiving (or Christmas, or Easter) without it. A special dish that brings happy memories and a sense of belonging that accompanies a long-held food tradition… For us, that recipe is my grandmother-in-law’s yeast rolls.

These rolls are so delicious, I’m certain you’ll want to make them for your own family. Be sure to save a few for the next day’s leftovers, too. There’s nothing quite like a slice of ham or turkey (or both!) tucked into one of these yummy rolls for lunch the day after.

You can make Grandma’s folded version, or shape the dough into balls for the traditional roll shape, leaving space between each roll to allow room for the dough to rise.

To make delicious rustic doughnuts, roll out the dough and cut into rounds according to the recipe, but also cut a small circle out of the middle of the round. Allow to rise. Fry in hot oil, flipping once, until golden on both sides. Roll the hot doughnut in cinnamon-sugar, or in your favorite glaze. Add some frosting and sprinkles on top if you want to get really fancy! 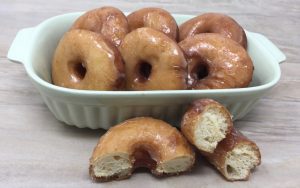 After scalding the milk, add 1 stick of butter to the milk and let sit until lukewarm.Beat eggs well. Add sugar and salt, beat. Add cooled milk, yeast and flour. Adding flour continuously using mixer then stir in the rest of the flour. Knead on board until smooth. Put in a large greased bowl and allow to double. Put on floured board and knead. Roll out and cut into rounds. Fold with a small dab of butter. Place in pan and let double again. Bake in a 300 degree oven until slightly golden brown.